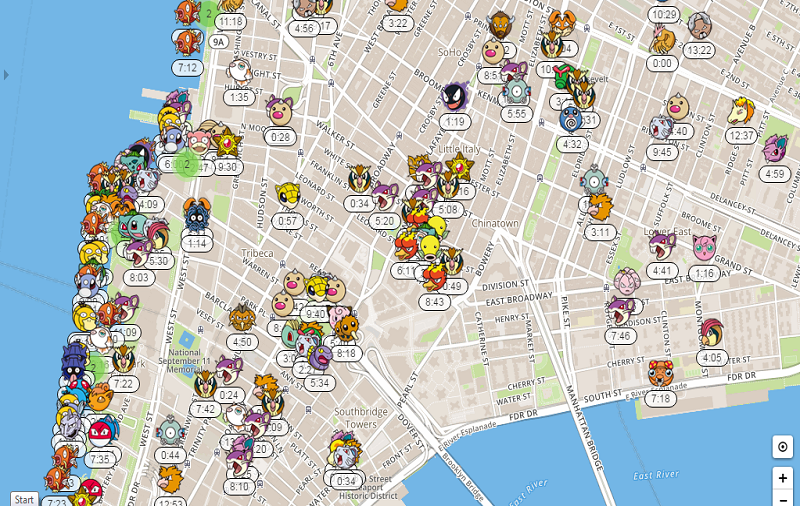 If you play Pokémon Go without a pokemap, you cannot avoid a minimum amount of movement. Pokemap or Pokémon Go maps are really necessary when Niantic has stopped every possibility of using them. Almost every relevant action involves getting on your socks and taking a closer look at your surroundings. Regardless of whether you are simply looking for a particular pocket monster or want to go on a raid with friends: Without a little exercise in the fresh air, nothing works here.

This is the greatest strength as well as weakness of the game. On the one hand, the monster hunt derives its appeal from sending players outside, where they are likely to meet like-minded people. On the other hand, the dependence on external factors drives a wedge in every effort to create equal conditions for coaches. If you live in a busy city, you will stumble across Pokéstops, arenas and the like much faster than someone who lives in a small village. The weather and your own time also play an important role in the fun of the game.

Of course, there is nothing to be said about letting yourself be a little aimless on a walk. However, if you are pursuing a more serious style of play and want to achieve something, you have to prepare routes that pass relevant locations. It is then particularly important to find out in advance and plan ahead in order to find the location of the desired game action and to reach it without unnecessary detours. Niantic has already tested several experiments for this purpose, but with very mixed results. The biggest problem is the almost unusable map of the game. Only a small part of your current environment is noted on this so that targeted marches are impossible.

So far, numerous hobby programmers and Pokémon Go fans have used this interface. External pokemap should provide all those interested in information that they cannot find in the game. For some players, such cards have so far been indispensable, while others dismissed them as cheating. The only thing that is clear is that offers such as these were indisputably extremely helpful. Because developer Niantic carried out a server-side API update last year, which made Pokémon-Go-Live-Maps almost unusable. At a stroke, such offers disappeared from the network over a large area, so that users have been dry since then. In this guide, you will find out what it is like to switch off the maps and which pokemapstill work.

Pokémon Go Maps: Why There Are No More Live Maps

Basically, there are two different types of cards:

The question remains, why Niantic has declared war on live maps from the start. The problem is the way in which such offers collect their information. Since Niantic does not allow an official interface to the in-game data, operators of live cards use countless bots, i.e. automated computer programs that pretend Pokémon Go to be human players. These bots are placed in a number of places until a dense network spans (if possible) the entire game world. All this information ultimately flows into the live offer.

Because bots can also be used for a lot of exploitation and cheating, they are expressly prohibited in the game’s terms and conditions. In addition, the high number of accesses places an enormous additional burden on the game servers. No wonder that Niantic has been trying to put a stop to such programs since day one – a project that was finally successful with the API update.

When all live cards are switched off, only collaborative offers remain. These are less reliable and fluctuate enormously in terms of their quality since they depend solely on the cooperation of other players. The following providers are among the most promising. But you shouldn’t expect miracles from them either.

Pokemongomap.info –Pokemongomap is one of the most well-known cards that are filled with information and specializes in arenas and PokéStops, but has also been expanded to include other functions. For example, a farming mode or that many PokéStops show which monsters appear nearby. You can also view field research.

The Silph Road – Also, an offer compiled from community information. The map can be used in the browser or is even available as an app for iOS and Android, but only shows you the locations of nests and is still comparatively new, which is why the map is currently a bit holey.

GymHuntr – Like so many other Pokemap, the site comes from the USA, but also works in other parts of the world. Before the Niantic’s API update, the card still offered everything a trainer’s heart could desire, but now you have to do without any live functions such as the extremely useful scan. In the meantime, GymHuntr relies on the cooperation of players, so that you get at least relatively dense and (depending on the area) complete Pokéstop maps. You can also have arenas displayed, although they naturally become outdated faster and are therefore not always up to date.

These are the only Pokemap or Pokémon Go Maps trackers that can be used in 2021. Well, we don’t guarantee you that these will work just like the old days as a lot has changed after Niantic’s update to block such Pokemon location tracker 2021. If you have got any other ideas that can be used as pokemap then you can throw them in the comment box to let our users know.