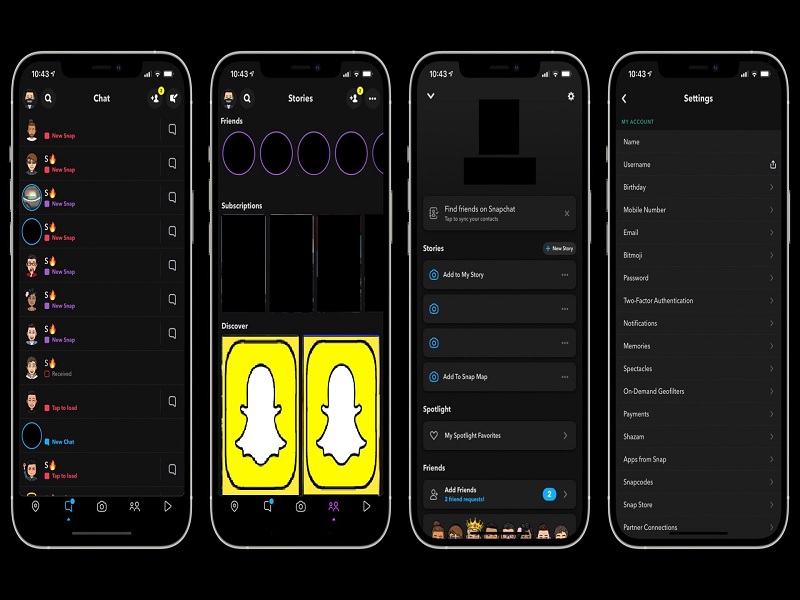 The introduction of Dark mode on a social media app has become mainstream. Not only does it give it a premium look and feel, but it is also amazing for the vision and doesn’t probe too many blue light reflections, making it many people’s favorite. However, while several other social media apps like Twitter and Instagram have had a dark mode for quite some time now, Snapchat was still lagging.

Enabling the dark mode during night-time browsing has become a common norm for users. So, if you were wondering if Snapchat has it or not, be surprised because they have finally introduced the dark mode and people can’t see to get enough of it.

However, the update has been rolled out as a beta version in the beginning, which means that not every user has access to it yet. So, if you are one of those unlucky people, don’t worry, we got your back. Not only are we going to share the standard way to enable dark mode on Snapchat on Android, but we have some additional tips for you as well.

What is the Dark Mode?

Before we move ahead and discuss the steps involved in enabling the dark mode on Snapchat, we must discuss what the dark mode is and what its significance is.

Often termed as Night mode, it is a phone or app setting that changes the color scheme of the individual app to a darker theme, preferably black or dark blue.

The primary function of the dark mode is to balance out the maximum of the harsh blue light settings from the varying applications, making it easier for you to use these apps for extended periods without putting an unwarranted strain on your eyes.

The only downside to the dark mode is that not every app that you download to your smartphone has it. However, with the growing popularity of the same, more and more developers are introducing the dark mode feature to give what the consumers are on the lookout for.

How to enable Dark Mode on Snapchat on Android?

Although the dark mode for Snapchat was officially introduced to the iOS devices back in May 2021, Android users have yet to receive it. However, Android has other ways to make things happen, and here’s what we are going to discuss so you don’t have to worry at all.

For switching the Snapchat settings to dark mode, you need to use the Developer options on your Android smartphone.

Following are the steps that you need to follow through:

The Force Dark Mode option is hands down the most convenient and effective method to turn on the dark mode on Snapchat on an Android phone. Some of the other methods that were used before are a bit backdated and involve downloading third-party applications, which is a hassle in itself.

This is hands down the best option and in-phone choice that you can use to enable a dark mode theme on Snapchat. However, since the dark mode update is already available on iOS, be assured that the same will soon be made available for Android devices too. So, you can wait out a few more months or use the technique above.

Other ways to get Dark Mode on Snapchat in Android

However, we understand that everyone wants to know about all the available choices. So, we have a few more that you can consider looking into.

When you navigate to the Google Play Store, there is an application called the “Blue Light Filter” app. Although you don’t necessarily get the complete dark mode in your Snapchat application using this, it does change and mellows out the screen colors, mimicking the dark mode look to an extent.

The application doesn’t require external rooting or similar issues, so you can install it on your phone and then enable it to protect your vision from the harsh impacts of the blue light. If you are particularly looking for a dark mode to be able to shield your eyes from the harsh blue light, this is a non-invasive method that you can try out.

However, the only downside to using this application is that it only works on rooted devices. Also, the dark theme that you are looking to change the device’s theme to is a paid one, so you need to pay some extra coins for that too.

If you asked us our opinions, we’d recommend that you don’t indulge in this option at all. It is a tedious one and requires you to have technical knowledge about everything around rooting and similar instances.

Another application that you can consider trying out is the DarQ application. This app is available for a smartphone with Android 10 and above. It enables the force dark mode feature for the varying applications that are available on the phone. However, unlike Substratum, this one doesn’t require any kind of root, so you can go ahead and try this for any of the Android devices that you own now.

If you are tired of waiting for the dark mode for Snapchat on Android, we hope these little tricks come in handy for you. While some of the methods are pretty great and simple to implement, we’d highly recommend that you stay away from the methods that involve rooting because that can end up damaging your device’s software, especially if you aren’t trained well with it. Besides that, since the dark mode is available for iOS devices, it is not going to be long till it is made available for Android too.

Does Android officially have the dark mode like iOS?

Unfortunately, no! Unlike iOS, Android has a few amazing beta rollouts for new features but none of them involve the infamous dark mode in it.

Do I have to buy the dark mode for Snapchat?

No, it is a feature that will eventually be rolled out to Android users as Snapchat introduced updates. Till then, you can try the methods we mentioned. There’s no need to “buy” anything for it.

Does every social media app have a dark mode?

More or less every social media app, including Instagram, Facebook, and Twitter have a separate dark mode function that makes the users comfortable browsing through these applications, even during the night-time.