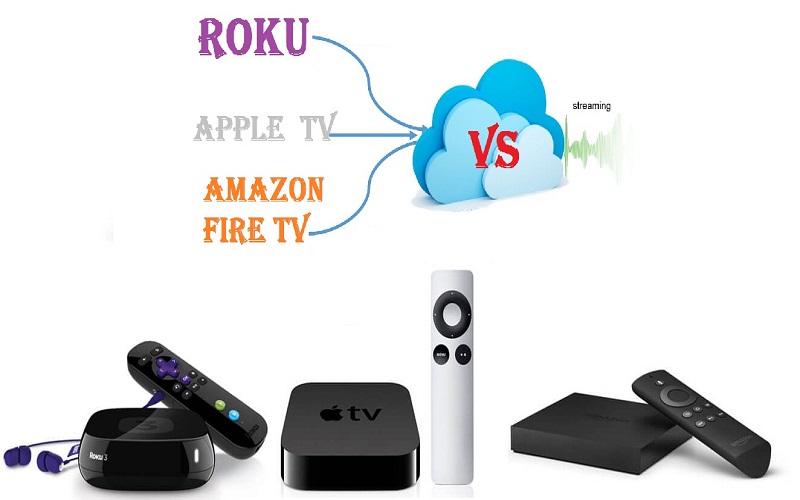 As per our viewer confused about the best feature of Roku vs. Apple TV vs. Amazon Fire TV and they asked us about this topic so we collected the best point to understand that which brand is good as per today Techno Media life.

Before we start the difference please note that Roku, Apple TV, and Amazon Fire TV are the streaming players which help the user to connect them with the media entertainment life.

We Discuss in details all of these three best brands which change the lifestyle of streaming players.

The below brief knowledge of the streaming which will understand you the variation of the product that is truly the best for you.

Roku is one of the best Americans branded which run by Roku, Inc a publically traded company by Anthony wood. It was found on October 2002 in Los Gato’s state of California in the United States of America.

It updated to the Second generation in 2015 with some changes in the features as per update technology with the lower cost of Roku LT, also includes HDMI, AV port (2) 3.5 mini plug with SD analog composite.

In third Generation, ROKU announced the faster CPU than the previous model with WI-Fi direct remote as compare to Bluetooth connectivity low speed and it has the built-in microphone for voice command and other specialized featured.

The Fourth Generation was introduced as the $k video technology where you get the new vision of picture and some upgraded in WI-FI, and remote finder technology.

In the Fifth Generation, 2016 upgraded their entire streaming system of a line-up with five different new models where people get more choices to attached with Roku.

In the Latest Sixth Generation, the Roku has become the best update with added in with supported previous old model function which the user loved with Roku.

Buy It From Amazon 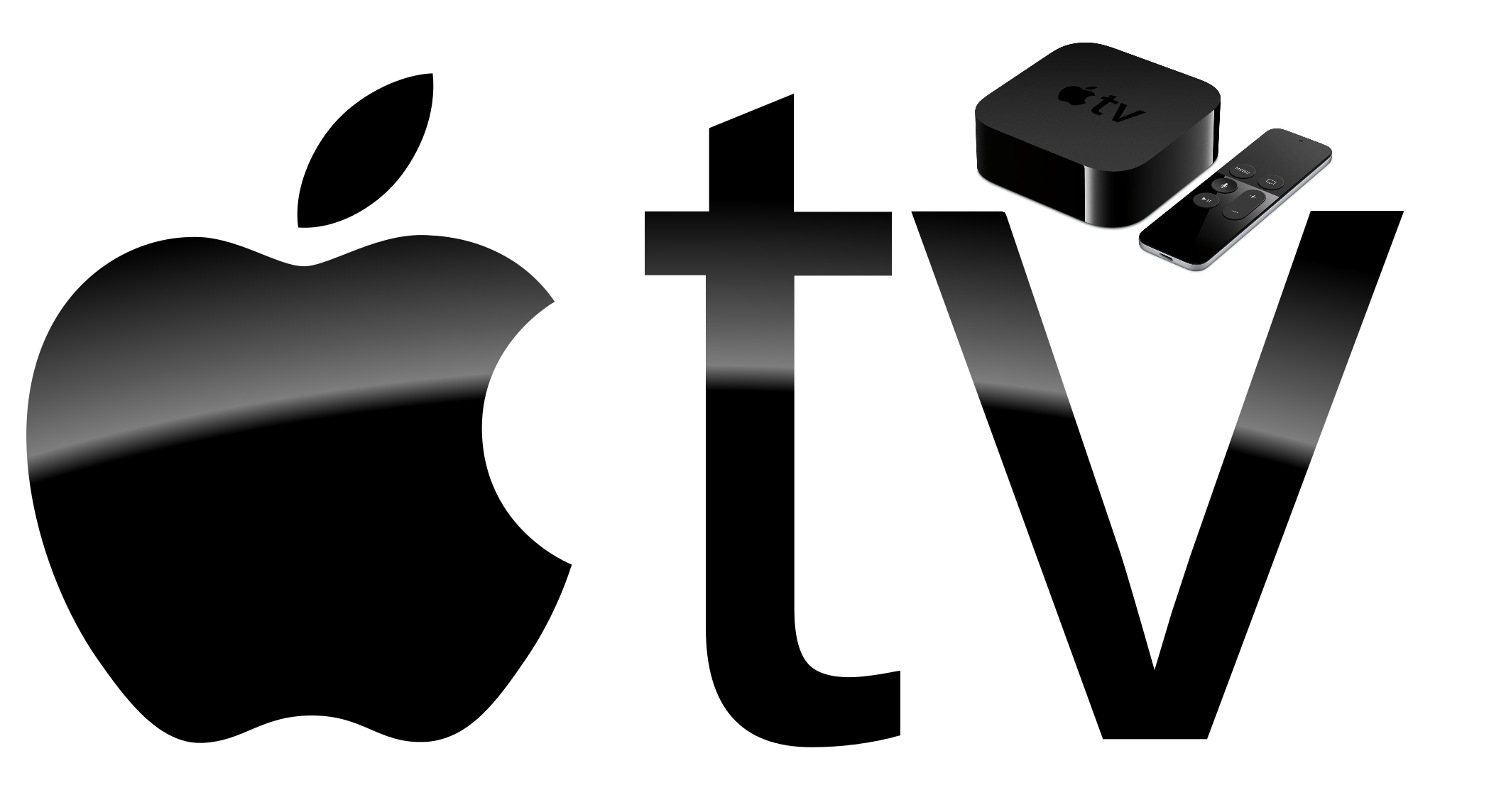 Apple TV is known as the digital media player which hit the luxury market in a merged of micro-console development. It was introduced in September 2006 with iTunes online service store.

1st: January 9, 2007; 11 years ago with 40 GB hard disk and HDD version. It turned the TV function into one device which needs no device such as the computer of windows or Mac running.

2nd: September 1, 2010; 7 years ago with 8 GB internal flash storage and allow to stream from iTunes Window / Mac computers or iOS Airplay devices. This device supports resolution of 1080p from iTunes and Netflix.

3rd: March 7, 2012; 6 years ago where it defines the future of TV as apps, in this generation it update all necessary featured to compete with the update techno world such as remote control, Siri, microphone, accelerometer-IMU, APIs with big screen clear picture support. It also updates the 3rd generation on January 28, 2013, with the specific update software.

4th: October 29, 2015; 2 years ago the first major update was made to this platform since the 2nd generation device released. The latest touch, swipe feature was introduced with this device where people get more interest in it and allow other source apps to download their video, games, audios, and entertainment which lives in this techno world.

5th (4K): September 22, 2017; 5 months ago the company updates the 10X software which helps the user to run their streaming player lighter and easier without any interruption.

Amazon Fire TV is the streaming tv media where people get every category they want with the additional featured presented in front of their eyes. It was introduced in April 2014 in USA, Germany, UK, and Japan with the operating software of Fire OS. The system supports the Qualcomm Snapdragon 600 with 1.7 GHz to GHz fast processor. The internal memory is 8GB with the resolution of 1080p and 4K clear picture quality.

The first generation of Fire-TV Stick with remote (without voice search, codenamed

The third generation of Fire-TV Stick with update fastest streaming software and in addition 5 other new Amazon products.

Differentiate between the three best streaming player that gives you the different way of entertainment and with the help of below chart you will get the right idea of your choice. 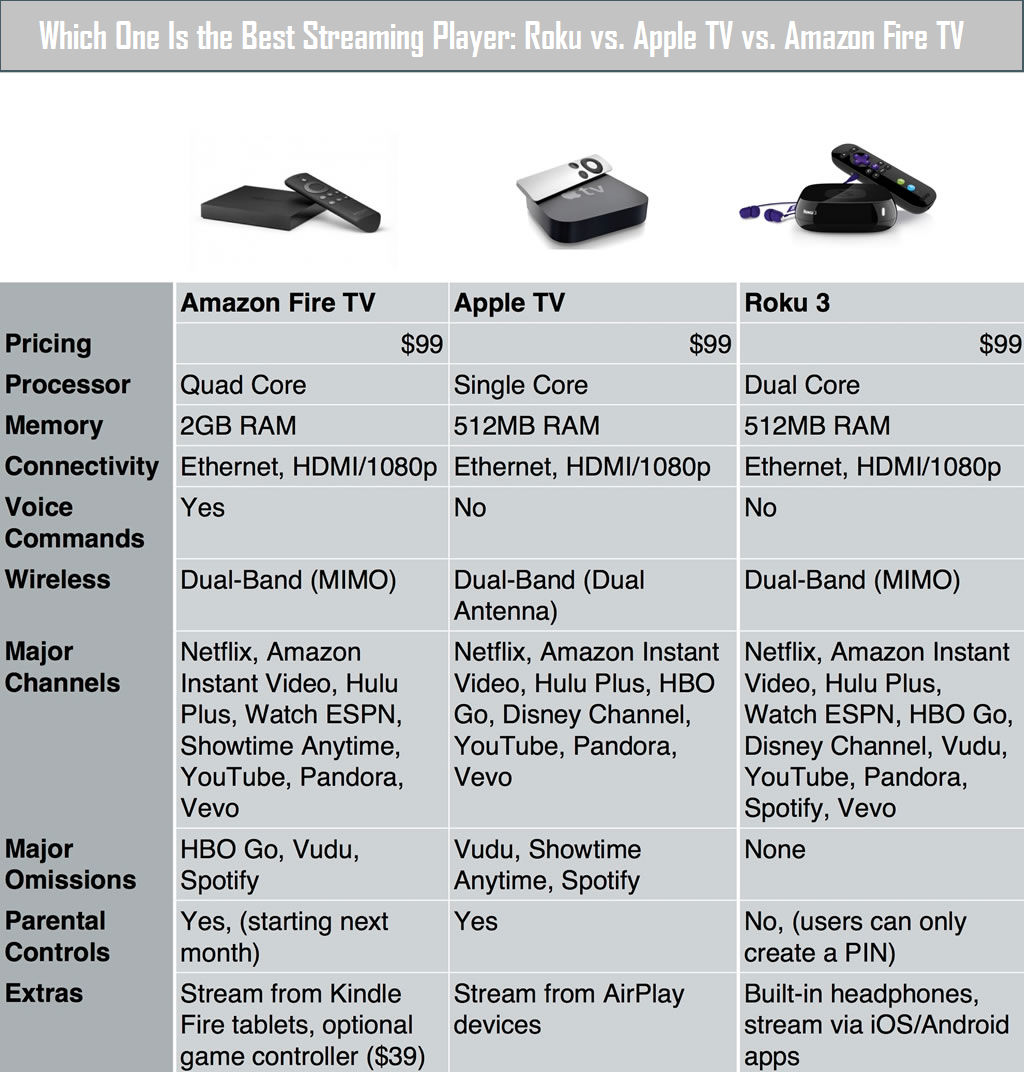 We hope you have now understood that which streaming player is the best among Roku, Apple TV, and Amazon Fire TV.

♦STAY TUNED FOR OUR NEXT REVIEW TO UPDATE YOU.