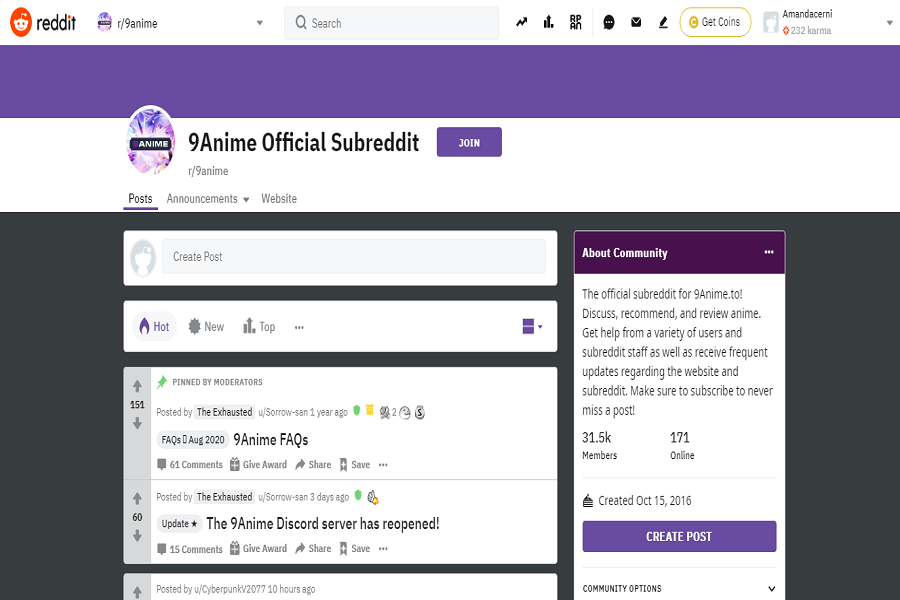 Since you have found this post, you must be familiar with the 9anime or at least the trend of anime that is taking over the world these days. 9Anime is among the top websites that allow users to stream anime series and movies for free online. Just like Crunchyroll and Kiss-Anime, this anime streaming website has a massive collection of anime around Japan. 9anime is already an established anime streaming website and that is why 9Anime Subreddit is getting popularity online.

Why 9Anime Is Preferred by Anime Fans?

Anime culture is not just limited to Japan but has become popular worldwide. There are many free anime websites where you can watch anime online in HD. However, only a few websites offer the quality services that viewers need. 9Anime is one of the major online anime streaming sites. With its extensive collection of Japanese anime movies and series, it has earned great popularity. The is really easy to use and features some enticing user interface. The landing page of 9Anime resembles Google where users can make a direct search to find any anime title with just a few clicks.

One of the main reasons for the popularity of 9Anime is that it is free. But along with that, there is no need to make registration on the website. There can be some ads popups on 9Anime when you wish to play anime video, but you can block such ads by installing an AdBlock extension on your browser. Just like all the other similar sites like 9Anime, it is also an illegal website that provides copyrighted anime series and movies. The name and the domain extension of 9Anime are changed very often in order to be safe from legal eyes.

Thus, the 9Anime Reddit account was created in order to provide all the latest information about what is happening at the 9Anime site. The latest 9Anime proxy and mirror links are also provided at r/9anime 9anime Reddit so, all the viewers don’t need to face trouble accessing the new links of 9Anime.

Reddit is a big social media platform with a massive community of users. With its distinctive subreddit feature, users can create an account related to anything. So, to gather all the community members of 9Anime, the site developers created 9Anime Reddit (r/9Anime) in 2016. With more than 31K 9Anime Reddit members, this is one of the most popular anime website communities on the internet.

There are several rules that need to be followed when you are a member of the 9Anime subreddit.

9Anime Reddit team is active and that is why they resolve all the issues and the queries asked by the members. Even members can also help each other. Issues or the question raised by the users are marked as “solved’ or “answered” once they are resolved.

Kiss-Anime is one of the best online anime streaming websites that have stayed online the longest and that is why it could be the best alternative to 9Anime. The selection catalog that it has is very wide for both movies and series, and its interface is friendly for new users. Everything is sorted and categorized, and series episodes are updated almost immediately after being broadcast in Japan.

In Kiss-Anime, users can be found from popular titles that are not so popular. Within this anime website, you can find titles in their original language with English subtitles, and in English dubbed audio as well.

This is one of the best alternatives to 9anime because it works both as a web portal and as an application for Android devices so that it allows you to always watch your favorite anime wherever you are, whether you have a computer nearby or not. Accessing a portal that will allow you to download the APK, and to install it on your phone, you must have the option to accept applications from unknown developers active, which grants the application permission to run. 4Anime is better organized in its Android application, however, this does not mean that the application interface is easier to use or better than the website interface.

Of all the 9Anime alternatives, Chia-Anime stands out for both its catalog and its interface, which has turned out to be a strategy that attracts a new audience. Each of the anime movie or series is shown with its title on the main page, showing an image of a scene from the episode or movie as a preview to create expectation and excitement for those who wish to see the title. Another strategy to get new people to see titles that may not be so popular is to have a section of recommended anime, where they list a series that is worth watching. All the content on the page is well organized, being one of the first recommended options for those who want to start watching anime.