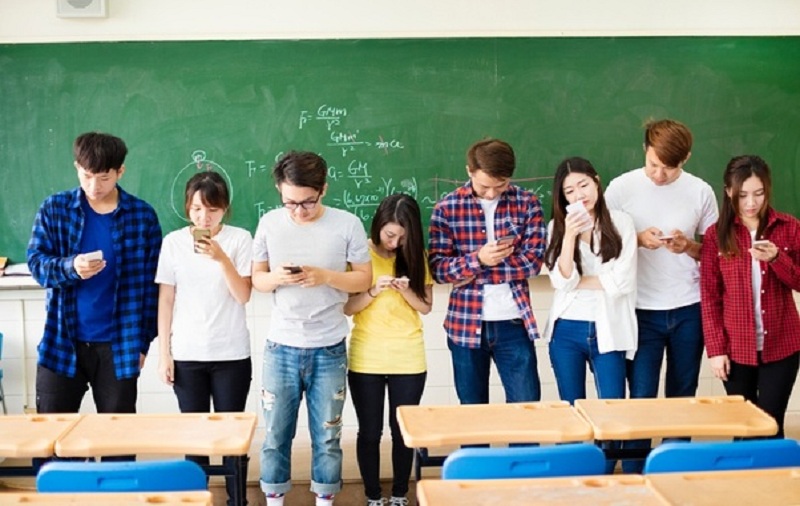 Students sometimes harm themselves when they try to increase their academic grades. They undertake many activities, which steal their time and don’t allow them to develop their skills. One of the greatest matters of concern is the continuous use of cell phones. They don’t simply use them at home or during the breaks at school. Schoolers of different ages actively use their gadgets right in the classroom and aren’t even shy of that.

As a result, many parents and educators want cell phones to be banned in schools. We have investigated this essential matter and are ready to highlight 5 strong reasons why cell phones shouldn’t be allowed in schools.

Cell phones act as big distractors of concentration and attention. If they are excluded, students hit higher grades. The University of Texas and Louisiana State University conducted a study, which proved a stable improvement of academic performance in pupils who were banned to use phones. Quite soon the researchers detected a positive outcome. Schoolers sufficiently improved their grades.

They stopped wasting their time on texting and reviewing videos. This result was expected and actually obvious. Several other studies also proved positive outcomes for schoolers who were disallowed to use their gadgets. It’s remarkable that the use of other gadgets as tablets and laptops should be included in these studies.

Another typical issue is related to time management. Students seem to be fully absorbed with their gadgets and cannot spend a minute without them. They use their phones everywhere and at any time. This is a real sign of an obsession. Many scholars agree that their love for cell phones may become a serious addiction compared to alcoholism or smoking.

It’s not surprising that many children receive poor grades. They don’t execute their homework and don’t practice their learning skills properly. Most of their free time is spent on sending messages, hanging on the wire, watching videos, reviewing the content on social media platforms, etc. Kids rarely use their gadgets to find some useful websites to solve their academic tasks and duties.

There are many situations when pupils were assaulted in virtual reality. This is also known as cyberbullying. Not all gadgets that are connected to the World Web are properly protected. Multiple hackers, viruses, and malicious programs break through the firewalls. Moreover, many teens accidentally reveal some private information about themselves on social media. Thus, dishonest people use these chances to bully poor kids online.

Most schoolers who actively use their mobile phones have this or that health deviation. Sometimes, they suffer from several ailments at once. One of the most typical health problems is obesity. As kids commonly sit in one place to work with their gadgets, they rarely move. Besides, they consume junk food. Thus, they become physically weak and put on excess weight.

Another problem is related to their sight. As they constantly look on the screen, they spoil their eyes. Sometimes, it leads to poor sight and sometimes induces full blindness in the long run.

Teachers union the NASUWT is against the implementation of cell phones during lessons. A recent survey showed that 46% of its members proved that cell phones are amongst the greatest enemies of lessons. They greatly distract the attention of both pupils and teachers.

Pupils use their phones right in the middle of the learning process. The signals of the delivered messages and ringtones of the calls surely withdraw the attention from what a teacher explains. Many schools try to punish or at least somehow control such situations. Nevertheless, you won’t get a 100% guarantee that some phones won’t break the silence the next time.

Are They All That Bad?

It’s worth mentioning some positive aspects of using cell phones. There are several important benefits every schooler can reap. Nonetheless, we warn that mobile phones ought to be implemented only for educational goals. Make allowances for the following essentials:

As you can see, there are certain benefits as well. You cannot deny them, but the use must be wise. It’s impossible to control every schooler. However, it’s possible to collaborate together with parents and explain to children that cell phones can be used on the campus only for educational purposes. Otherwise, schoolers harm themselves.